I’ll make you a bloody poppy!

After reading No Glory in War’s link to the Guardian piece on the ceramic poppies at the Tower of London for remembrance day, I felt I wanted to make my own response. You’ll know my thoughts on poppies from my previous year’s posts and they haven’t changed – save being all the more non red poppy due to hearing arms makers sponsor it. As ever, my two poppies did not feature the colour red (white for peace -jingoism; purple for animals).

Here is my freshly painted piece on war – it’s harsher in real life. Look hard. It’s visceral, violent, scarlet against sable, pink of flesh, black for the darkness of war, full of runs and clots, thorns and barbs, bile and blood.

But note the white…. I hear the Peace Pledge union ran out of white poppies this year! (alas I saw few on bosoms, except my own) and I was so pleased that anti war veterans had an alterative gathering at London’s cenotaph, just as my local Quakers popped a white wreath by the red military ones and wrote in big (so we could see, since it was placed at the back) for ALL victims of war – ie whatever country – not just ours. 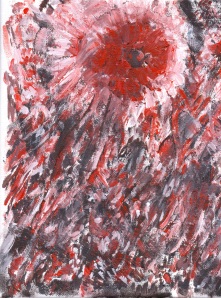 If you want to buy it in various forms, pop over here